Just about a year ago, Thomas Walkup was arguably the most famous basketball player in the United States.

“March always has been my favorite because it’s so exciting, that first two weeks of the NCAA tournament,” says the sturdily-built East Texas native who seemed to more than symbolize his Stephen F. Austin Lumberjacks. “That’s hard to beat.”

Walkup, the most contradictory of names, proved very hard to defeat last March when he led his 14th seeded Lumberjacks to the upset of the tournament over No. 3 seed West Virginia. Then with Walkup again the game’s leading scorer, SFA in the Barclay Center in front of celebrities like Beyonce missed another upset, this time when Notre Dame got a tip in with a second left to win by a point.

“It was so much fun representing SFA and Nacogdoches in general,” says Walkup, his infamous red beard extant, though trimmed. “It was such a blast, nothing but great memories. There something about college basketball and being with those guys and getting the win when no one expects you to that’s special, close to my heart. Hard to beat that memories.”

It’s quieter now when Walkup plays, virtually no media or public attention, though he is no less intense. Walkup is a run-up guard for the Windy City Bulls, in some respects still the representation of his game. In college, it was the thirsting overachiever, the Cinderella of East Texas taking his Southland Conference team to a pair of NCAA first round shockers in three straight appearances. Now, Walkup is the overlooked pro, perhaps a bit slow or a unskilled, but through force of will and identity seeking to upset the status quo and make an NBA roster. 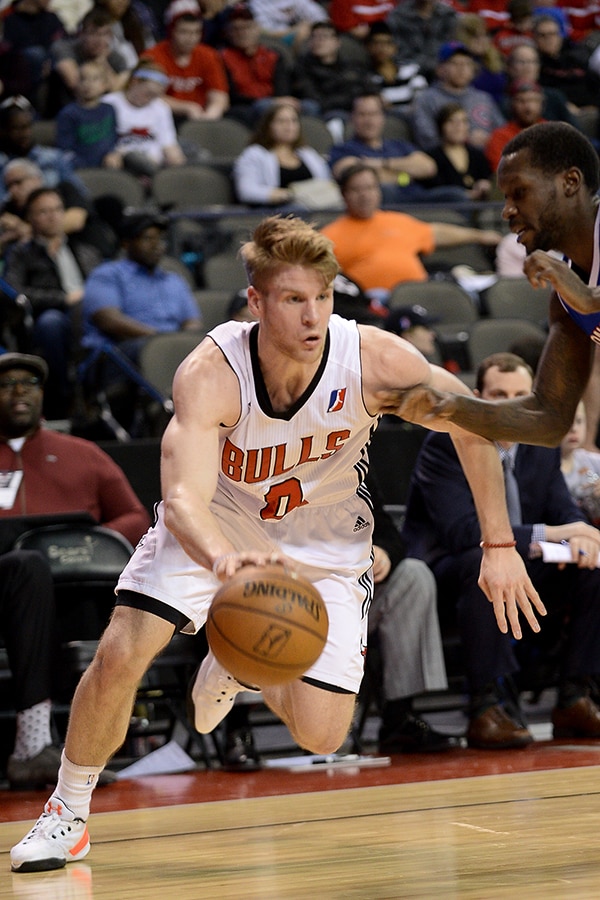 And you’d be wrong to overlook the hustle and heart as much as West Virginia and Virginia Commonwealth, the latter in 2014, overlooked those Lumberjacks wielding their forceful game like an axe chopping down the tall trees of the college game.

“I’m trying to show people I can play and take the next step,” says Walkup, who has started 23 games this season for Windy City as an all around handy man perimeter player. “I think the D-league gives you a really good platform to show what you have. They are streaming games now, so anyone can watch any D-league game. It’s a great opportunity for me to showcase what I have.”

Most everyone has what Walkup has, which is an ability to disrupt opponents. Just few do it as regularly and aggressively. He may not be the fastest or with the best shot, but he’ll press and pressure every moment he’s on the court, and has made big plays in big games.

“I’m glad I’m here,” says Walkup. “My toughness (is a specialty), being able to guard multiple positions, being able to make plays and find a niche, my winning attribute. Being a good teammate, guarding and being tough as nails. I think there is a need for that.”

Walkup has dreams just like everyone else who can calls themself a professional basketball player. But his are realistic, and reasonable. He likens himself to a Matthew Dellavedova type. Yes, you can win a championship with people like that on your team.

“I’m pretty realistic,” says the 6-4, 210 pounder. “I knew to make an NBA team first year would be a grind. I knew I’d be undrafted and hopefully would get a camp invite, try to make team that way. If not, do what I am doing, come down here and grind, try and get a call up; I’ll say this is a realistic path. I think it’s my path that kind of paved my way with the injuries and made me very persistent, made me stay with it. I’ve always had the chip on your shoulder attitude. It’s what I grew up with, older brothers. It’s always been competitive. That’s how my career has gone and has paved the way for this.”

Like every other tough kid growing up in Texas, like Jimmy Butler, for instance, Walkup was a football player. He became attached to basketball, though never left the football mentality too far behind.

Walkup didn’t get much college interest, which in his positive way was a good break. Just Houston Baptist and Stephen F. Austin. He chose the latter for the chance to play in March Madness. And, oh did he play in overcoming two torn ACLs and a broken foot in high school.

“It was difficult to get news (of that first ACL), but I worked as hard as I could to get back, did that and exceeded what I was doing,” said Walkup. “I was under recruited coming out and that couldn’t have been better for me. I can’t say I wouldn’t have gotten an opportunity, but the situation coming into SFA was great. I’m glad no high offers from high majors, but I couldn’t see anything being better than my time at SFA.”

Walkup was the darling of mid-major, winning the mid-major Lou Henson player of the year award. Dellavedova didn’t previously. He was Southland Conference player of the year twice, conference all-defense three times, averaging about 10 points in the NBA Portsmouth camp and then in summer league with Golden State and getting a look in the Bulls camp this past October. And then on to Hoffman Estates, where he’s lost none of his enthusiasm and effort.

Walkup was part of that 12 seed that beat Virginia Commonwealth and then last year’s shocker. He had 33 points against West Virginia, making 19 of 20 free throws in that upset game along with his kind of line of nine rebounds, four assists and four steals. He’s a walking, well diving, floor burn. Need someone harassed for five minutes, up, pressuring, bothering? Really good NBA players don’t like that. He’ll do that.

But for now it’s making his way in the D-league, and it’s not simple as he doesn’t exactly have a favored nation status. He often starts, but then the NBA team sends down its players for some work and he doesn’t play.

“It’s happened multiple times where I felt really, really good about my game, played really well, scored 20 and then I get a few minutes,” said Walkup with a shrug. “Don’t get me wrong. I get that’s how it goes, but it sucks sometimes. When stuff like that happens, clap for your teammates, be happy when you win and when your shot comes up you take it. We know the NBA guys who do come down will take the minutes. So knowing that and having a good attitude about it and not letting it affect the next game to come is very important.”

Walkup is averaging 8.4 points along with 4.3 rebounds, 3.7 assists and 1.1 steals playing point guard, shooting guard and some small forward. He played more earlier in the season and had several games with double digit scoring and more than five assists and five rebounds. But with NBA players coming and going recently, he played less. He’s averaging about 25 minutes and remains determined, a common trait in the D-league.

“I work on my shooting every day,” says Walkup. “I know that’s my weakness. I’m physical, comparable to Dellavedova, tough, can play make. But I need to be able to shoot a little better for a true comparison to him. I’ll get there. I’m living by myself now. There’s a lot of growing up to be done. There are some negative things said about life in the D-league not being fun, but being in the Chicago area, playing. I’ve really enjoyed it.”